You are here: Home › Posts › What has become of the July 2015 Nuclear Agreement with Iran?
Published on 1st November 2016 in Nuclear Weapons, Verification, Disarmament, Events, Recent events, International Peace & Security

At a British Pugwash discussion meeting on 11 October, Peter Jenkins outlined the most important commitments that 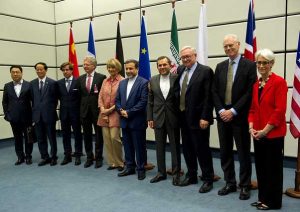 Iran and the P5+1 assumed in July 2015, to resolve concerns about the nature of Iran’s nuclear programme. He described progress made towards full implementation of those commitments. He then discussed whether the agreement is likely to survive political opposition in both Tehran and Washington DC, and whether Iran still presents a long-term nuclear proliferation risk.

In the course of a 33-year career as a British diplomat Peter Jenkins CMG served as Ambassador to the International Atomic Energy Agency and UN Vienna, coincided with the emergence of Iran’s nuclear programme as an issue of international concern.