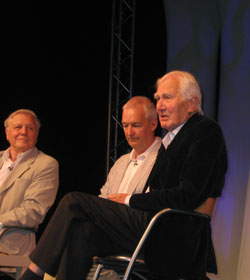 It is a central purpose of Pugwash to communicate with governments about ethical issues that arise from professional scientific activity. As few scientists are very experienced in the arts of high politics, such communication can prove problematic – as indeed it is with the topical concern over the future of Trident. There can be no-one better qualified than Tony Benn to illuminate this scene for us from a lifetime of political experience. The talk was preceded by a book signing for two new books by members of British Pugwash. Joseph Rotblat: Visionary for Peace, edited by Reiner Braun, Robert Hinde, David Krieger, Harry Kroto, and Sally Milne and Bending the Rules: Morality in the Modern World – From Relationships to Politics and War by Robert Hinde, CBE, FRS FBA Chair of British Pugwash and an eminent biologist and psychologist.