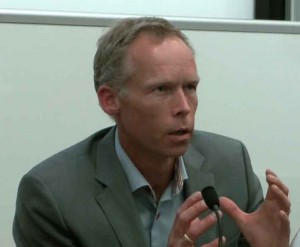 Addressing a well-attended British Pugwash Group meeting on 6 July at University College London, Professor Johan Rockström of Stockholm University outlined the concept of planetary boundaries developed by an international group of earth scientists and systems analysts and Mark Lynas, author of the award-winning ‘Six Degrees: Our future on a hotter planet‘, has written a new book ‘The God species: How the planet can survive the age of humans‘ introducing the science behind the identification of planetary boundaries. A lively panel debate followed.

What price nuclear blackmail?
Rotblat – a nuclear physicist in the public eye 1944-1957