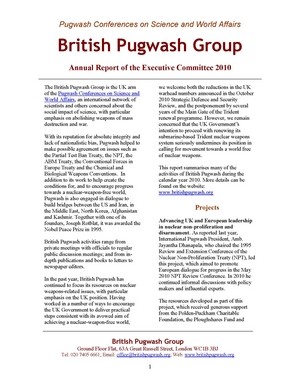 In the past year, British Pugwash has continued to focus its resources on nuclear weapons-related issues, with particular emphasis on the UK position. Having worked in a number of ways to encourage the UK Government to deliver practical steps consistent with its avowed aim of achieving a nuclear-weapon-free world, we welcome both the reductions in the UK warhead numbers announced in the October 2010 Strategic Defence and Security Review, and the postponement by several years of the Main Gate of the Trident renewal programme. However, we remain concerned that the UK Government’s intention to proceed with renewing its  submarine-based Trident nuclear weapons system seriously undermines its position in calling for movement towards a world free of nuclear weapons.