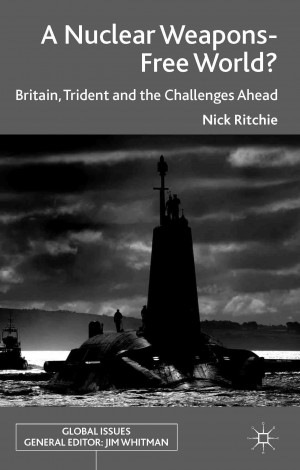 The launch of Dr Nick Ritchie’s book A Nuclear Weapons Free World? Britain, Trident and the Challenges Ahead (Palgrave, 2012) addressed the question: Why is the UK still committed to nuclear weapons, what are the prospects for a change in UK policy, and what does the UK process tell about the prospects for disarmament?

Dr Ritchie explored the ‘enablers’ of the Trident replacement process, in particular a commitment to nuclear deterrence, the role of national identity, the ‘special relationship’ with the US, and the submarine-building industry. He also analyses the key ‘resistances’, including the logic of nuclear disarmament, cost, public opinion, and alternative nuclear weapons policies.

Sir Nick Harvey, Liberal Democrat MP for North Devon and former Minister for the Armed Forces (May 2010 to September 2012) who oversaw the Analysis of Alternatives for the Trident replacement programme, questioned the relevance of Trident replacement to the UK’s current defence needs and economic situation. He pointed to the next two years as a critical period for debate on the future of Britain’s nuclear weapons programme.